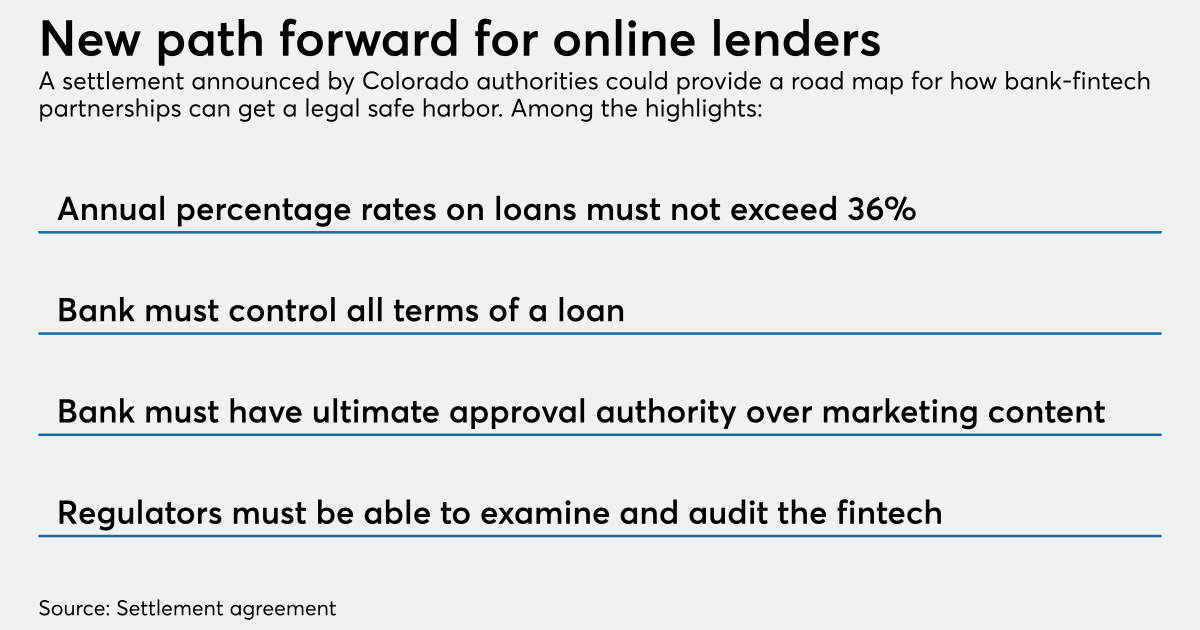 Colorado officials have reached a settlement with two online lenders and their partner banks, ending years of legal wrangling and providing a way forward for fintechs who have been reluctant to do business in the state.

Under the agreement, which was announced on Tuesday, businesses can benefit from a legal safe harbor in Colorado if they comply with a detailed new regime that includes a ban on loans with annual percentage rates above 36%.

The state’s settlement with online lenders Avant and Marlette Funding, as well as WebBank and Cross River Bank, marks an important step in the legal fight over which company is the so-called true lender in consumer transactions.

“It provides a ton of clarity when it comes to this area of ​​the law that has caused a lot of confusion,” said Roxy Bargoz, the Chicago-based general counsel for Avant.

The Colorado Attorney General’s Office sued the four companies in 2017. The lawsuit argued that Avant and Marlette, which offers personal loans under the Best Egg brand, were charging interest and certain fees above those allowed by law. of State.

Although the loans were made by Utah-based WebBank and New Jersey-based Cross River, which are allowed to export their home state’s interest rate caps, authorities in Colorado have argued that Avant and Marlette were the true lenders because they held the predominant economic interest.

The settlement offers a potential solution to a problem that has long vexed online lenders — the state-by-state patchwork of interest rate caps. Online lenders often work with banks that have the power to export their home state’s rules, but some of these partnerships have been challenged in court under the same theory used by Colorado.

Just last week, a federal court in Colorado ruled that a small business borrower deserved the opportunity to investigate whether their loan came from a Wisconsin-based bank or the bank’s partner.

Technically, only four companies are bound by the terms of the settlement. But the deal could have broader implications, both in Colorado and across the country. In the Centennial State, other online lenders may decide to structure their business in a way that aligns with the regulations requirements for a legal safe harbor.

“This agreement protects Colorado consumers and creates a model for how other lenders can comply with Colorado law and treat consumers fairly,” Colorado Attorney General Phil Weiser said in a press release. .

Officials in other states — especially Democratic-leaning states with relatively tight interest rate rules — can also consult the terms of Colorado’s agreement for guidance on how to allow partnerships between banks and fintechs in a way designed to avoid harming consumers.

The online lending industry might prefer a federal solution, but it’s unclear if a lasting response is coming from Washington. While the Office of the Comptroller of the Currency proposed a rule in July that would determine when the bank is the true lender, this approach may prove to be short-lived if the Democrats win in the next election.

The settlement announced Tuesday sets out detailed rules for qualifying for a legal safe harbor in Colorado.

In addition to interest rate caps, the partnership between the bank and the online lender must meet various supervisory standards. For example, regulators must have access to review and audit the online lender, and the bank must control all credit terms, including the right to approve and deny loans.

In addition, the regulations provide several options as to how the bank can retain some degree of risk in relation to the partnership. Perceptions that banks involved in online lending partnerships do not take on enough risk have fueled suspicions about which company is the real lender.

As part of the settlement, the four companies will also pay a total of $1.55 million, including a $500,000 contribution to a program that supports financial education in Colorado schools.

The 2017 lawsuits had significant economic consequences for the U.S. online lending industry. After the lawsuits were filed, Avant and Marlette excluded Colorado loans from new securitizationsand WebBank stopped issuing loans in the state.

Online lenders fizzle in crisis with On Deck agreeing to sell