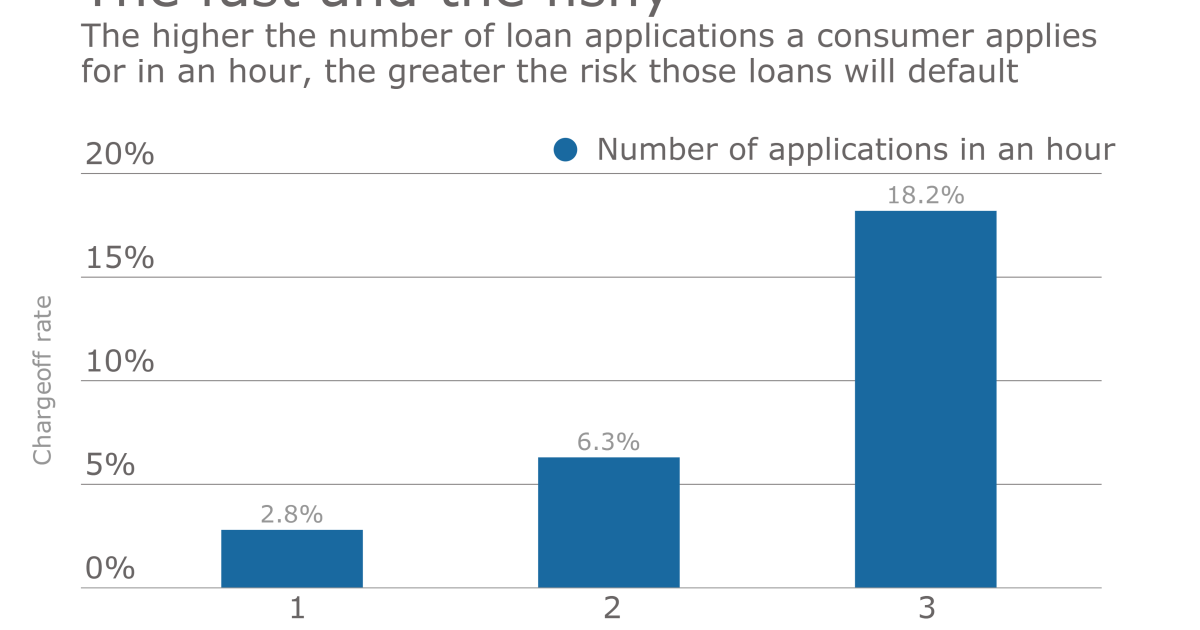 How Fraudsters Play With Online Lenders

Online lenders’ speed advantage has exposed them to a growing problem: a type of fraud called loan stacking.

People are taking advantage of the fast loan approval times offered by online lenders to game the system by applying for multiple loans online shortly before credit reports are updated to reflect the increased debt load . By doing so, they are able to get more money than they would typically be entitled to on a single loan.

Some use fake identities to get loans and others use completely stolen identity information. Others use their real identity but take out one or more loans without ever intending to repay. And there are people who have been through tough times and need more money than any lender will give them.

Investigators from companies like TransUnion, ID Analytics, and Clarity Services are beginning to see the clues that indicate a loan applicant is worthless, and they’ve learned some of the characteristics of loan stackers.

A surprise in early findings from investigators is that online loan scammers tend to hit phone companies first.

“They’ll go around and they’ll apply as much as humanly possible; they tend to start in telecommunications,” said Pat Phelan, senior vice president of TransUnion, whose Fraud Prevention Exchange monitors applications from phone and card companies as well as online lenders. “They’ll open a mobile account, get a billing address on that mobile account, then they’ll go to traditional non-fintech borrowing, then they’ll go to card and fintech.”

What makes telephone operators attractive? They have a light client onboarding process; they do not have the same Know Your Customer compliance procedures as lenders. Their main goal is to sell a phone.

“You are probably entering with someone else’s ID or a fake ID. The person examining it is probably very young and looking at a piece of paper that has an identity,” Phelan said. “They’re probably not as attentive.”

Another interesting finding is that online loan scammers who steal identities know how to prey on victims with high FICO scores. A superprime borrower is much more likely to be approved, and for a higher loan amount.

“There’s no real benefit to stealing credit records or the identity of someone who is a 475,” Phelan said. “If I had to steal anyone’s identity, it would be someone around 790-825.”

Borrowers are not necessarily hardened criminals.

“Everyone wants to hook this into their traditional view of some sinister guy, a hacker in his basement who has 100,000 identities he bought off the dark web and methodically asks for credit,” Tim Ranney said. , President and CEO of Clarity Services. “The thing is, your next-door neighbor might as well be a loan stacker. And loan stacking is not a crime, it’s too easy an opportunity for a consumer to be overwhelmed without a lender being able to spot the consumer doing it.

Indeed, ID Analytics’ analysis of its data, which includes a database of 2.4 million past fraudulent incidents, revealed no clues to distinguish borrowers from people looking for the best loan deal.

“There is clearly no hard evidence in terms of these consumers’ credit profiles,” said Patrick Reemts, vice president of credit risk solutions for ID Analytics. They are the same average age and live in the same types of homes as people who normally seek loans, he said.

“To us, that means they’re particularly new to this game, whether they’re fraudulent or just bad credit managers of their own finances,” Reemts said. “It doesn’t appear to be a group of hardened criminals.”

ID Analytics classifies loan stackers into three categories: Fraudsters, Buyers, and Over-indebted. Fraudsters deliberately request loans that they have no intention of repaying. Loan buyers are financially savvy consumers who apply for multiple loans because they are smart enough to know they can shop around and get the best rate. The third category is financially distressed consumers who need more than one loan to make ends meet.

The only signal that strongly indicates fraudulent intent in loan stacking is velocity.

Intentional and nefarious loan stackers are obviously the ones that online lenders and their service providers try to catch and block.

“They have no intention of repaying these loans, they knew the weaknesses in the system and exploited them,” Reemts said.

The anonymity of the Internet removes the stigma of defaulting on a loan and encourages people to do things that societal conventions would typically prevent them from doing.

Even if the stacker shares his real identity, due to the physical distance between the lender and the borrower, it is extremely difficult for the online lender to recover his money.

When a loan is large, the lender can afford to hire a collection agency and a lawyer to chase the customer for the money. But if a lender in Portland, Oregon lends $1,000 to a borrower in New York who does not repay, “what kind of effort can you profitably make to recover that $1,000?” Ranney said.

A default would drop the borrower’s FICO score, but that might not be a major concern for them.

“The consumer who is considering defaulting on a loan has already thought about the repercussions and they don’t care,” Ranney said.

Some stackers use stolen identities to avoid getting caught. “Over the past 12 months there have been so many violations that I can just apply on your behalf,” Phelan said. “If they have your username and password and they have your email address, the rest is pretty easy to put together.”

These scammers will use a stolen identity to open a new bank account (perhaps using a mobile bill and fake ID as proof of identity) and apply for a loan from an online lender, who will pay the funds on the new bank account.

In some cases, fraud rings lead to loan accumulation. TransUnion recently caught a fraud ring that was sending multiple loan applications from the same IP address but from different devices.

“You have rings that are very organized,” Phelan said. “They are smart fraudsters who don’t just find out someone’s identity and apply for a loan.”

The ring was caught before any damage was done. “We reported an IP address and our client matched that IP address and we found a big fraud” before the loans were approved. In such cases, TransUnion and other loan stacking defense providers hand over the evidence of fraud to their customer, who decides where to take it from there.